So 2016 comes to its foundation-rattling end, and so many people want to forget it as the collective nervous breakdown in the West continues. A New Year is a moment for Christians to reflect on how we can be different in the year to come. Here are five pleas I want to make for Christians and Churches to consider putting central in the coming year.

1.  Hope in God. In the two great psalms that explore despair and hope, Ps 42 and 43, the psalm writer repeats the exhortation to himself: ‘Why are you cast down, O my soul, and why are you in turmoil within me? Hope in God; for I shall again praise him, my salvation and my God.’ At the end of the year that has seen some great political earthquakes, an appalling civil war in Syria, and massive terrorist attacks in France, Belgium and Germany, do you have real hope? I ask this because I have heard so many Christians say as the next upheaval or calamity happens, ‘But still, God is sovereign’, almost as though this is our last ditch hope. We have our own plans and our routine, and we plug on through life seduced by the certainties of a daily working routine, a stable stock market and a quiet suburban life. But when everything is thrown up in the air, whether in a referendum result, a presidential election, or the more visceral and desperate aftermath of a terror attack, then and only then do we clutch hold of the sovereignty of God. The sovereignty of God should not be our last and desperate refuge. He is our salvation and our God! We should be close to him, united through the daily fellowship of prayer, looking at the world as his world, and every aspect of our lives as lived for his glory. Our confidence should be in him, whatever happens, and whatever foes we face, knowing that in life and in death he is our salvation. END_OF_DOCUMENT_TOKEN_TO_BE_REPLACED 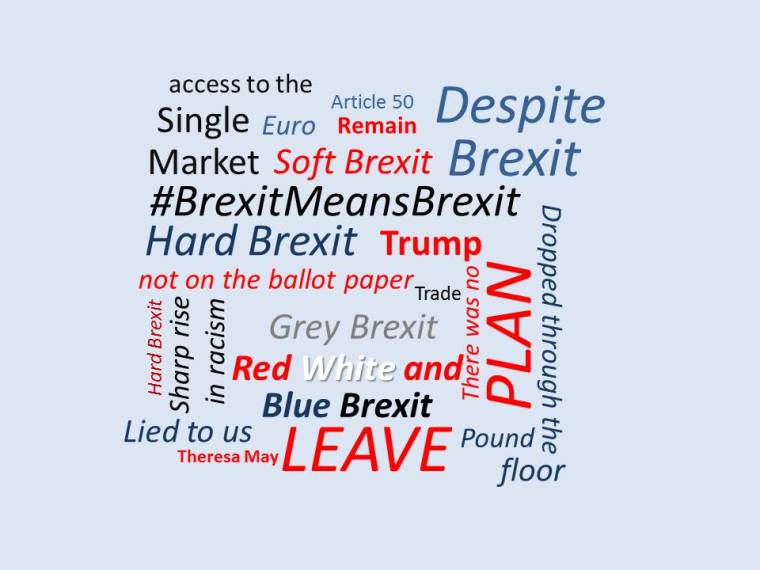 Six frenzied months have passed since Britain voted to leave the European Union. Politics is interesting again. All of a sudden it is hard to find anyone who doesn’t care about politics. For a second time we have a strong-minded woman Prime Minister, stirring many memories. However, unlike the 1980s, we are still living in the age of spin. The political class think that everything has to be reduced to a slogan that will somehow stick in our apparently simple minds. So the press oppress us by refusing to stock nuance, or supply detail, or honour our intelligence with a decent debate, because we are told that there is no demand for anything other than meaningless slogans.

So, let’s take some Brexit slogans in turn and unpack them to get a little nearer to reality.

‘Brexit means Brexit’. This is the silliest slogan of all. Imagine trying to explain anything else in the same way: ‘Marriage means marriage’, ‘Cricket means cricket’, or ‘Fruit cake means fruit cake.’ At least when you shout ‘Points mean prizes’ there is a connection between two different but related words. But since Brexit is an invented word to describe a process that has never happened before and has yet to happen, I’m sorry Prime Minister but this catchphrase does nothing. Nor are things clarified by some engaging adjective. A Hard Brexit sounds painfully surgical, a Soft Brexit fluffy and pillowed from all ills; then there is a Grey Brexit (presumably loved by John Major, though I doubt it) and even a Red, White and Blue Brexit (could also work for the French and the Dutch) though by now this is just getting silly. The politicians should admit they are patronising us because they don’t want to discuss detail in public.

‘A hard Brexit was not on the ballot paper.’ This was claimed by Lib Dem leader Tim Farron MP. What does he mean? Well, a ‘hard Brexit’ (I think) means leaving the EU completely, including the customs union that allows tariff-free trade between EU countries, as well as ending the jurisdiction of the European Court of Justice over the UK. We would be out of the Single Market and its regulation of British business and finance. Agriculture and fisheries policy would be ours to decide. A ‘soft Brexit’ means paying to be part of the customs union, continuing to charge the common external tariff on goods imported from outside the EU, sticking with Single Market regulations, and in some way remaining under the European Court of Justice. The problem is, the ballot paper was quite simple. It was a binary choice: ‘Remain’ or ‘Leave’. In the debates on TV, and conversations on the ground, the ‘hard’ options were what we were being offered, and the public voted to leave. We knew there were serious consequences. We knew it was a step into the unknown, and it might hurt our economy, but we voted to leave. Leaving can’t add up to a grey remain.  END_OF_DOCUMENT_TOKEN_TO_BE_REPLACED

The Great British Bake Off is over and gone for ever from the BBC. It is the only cookery programme that has ever made me dare to bake something and mostly succeed. It has made national heroes out of ordinary people, non-celebrities who we can genuinely identify with, and perhaps is the only programme that was genuinely worthy of the name ‘Reality TV’ (a term which seems to be an oxymoron in relation to the programme formats it usually describes).

The Bake Off has also been valuable for another reason: it has wonderfully embodied the Great British national conversation at so many levels. (For comparison, when the format has been sold to other countries, such as Holland for example, their versions have reflected their national conversation in all kinds of ways, and the Bake Off Italia – Dolce in Forno certainly has something about it that is all its own.) In the British Bake Off, the mother/son chemistry between Mary and Paul, the bad jokes of Sue and Mel, the idyllic country house setting in verdant Berkshire, and the wonderful range of accents and attitudes in the mix of contestants all came together to flavour this rich pork pie of British culture. In so doing, they have all helped to shape the national conversation.

What do I mean by a national conversation? It is hard to define easily, but it is a uniting conversation that typifies and expresses the life of that nation and embodies its shared life together. For it to be more than just a social conversation among a few friends, however, it needs to have some key elements.

First, a national conversation requires a common language. Forgive me for stating the obvious, but this is important. When the English nation was forming in the days of Alfred the Great, it was King Alfred’s commitment to spreading the English language across the nation he sought to govern that defined England. He was committed to education, and to translating parts of the Bible into Old English. END_OF_DOCUMENT_TOKEN_TO_BE_REPLACED 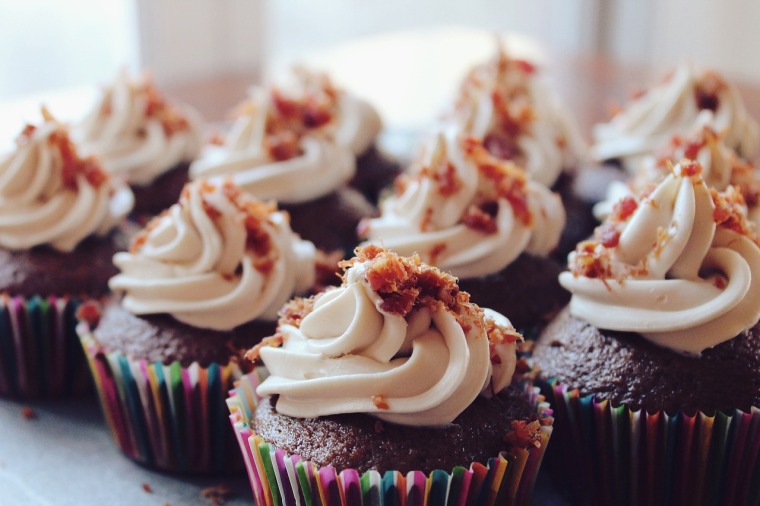 There lies in the ocean, turned towards the north and west, the island of Niatirb, which is reported to be cold and wet in winter. The islanders, surpassing all the peoples of whom we know in patience and endurance, have traditionally responded to the cold and dank by the interesting pastime of baking. This has happened since ancient times, though it is said that their great king may have been responsible for burning the cakes, so greatly did the unfair dominance of Europe (mostly the Danes) over his native England weigh upon his mind. Others minded their baking skills much the better, so that the Niatirbians have become advanced beyond any other nation in their baking, and in so doing have developed extraordinary delicacies, such as the cheese scone.

With the advent of the supermarket, and the slow decline of the traditional baker, it was agreed among the chief vision-meisters that the wireless picture box should address the decline in the baking skills of the Niatirbians by showing a series of baking parties. The meisters pondered holding this in a grungy warehouse, as they so often did when making modern shows involving dragons, but decided instead to plant a tent on the lawn of a stately home, to install pastel shaded worktops and to festoon the walls with bunting, since such bunting expresses in a unique way the joy of the Naitirbians. Each party would be hosted by the Twins of Innuendo and Laughter, together with she who is the Mother of all Apple Pie, and he who would be proved to be the Rising Prince of Darkness. And where the Mother of all Apple Pie shone with the sunshine, charm and pristine niceness of The South, the Rising Prince of Darkness came from The North, and so many could identify with his sense of lostness. END_OF_DOCUMENT_TOKEN_TO_BE_REPLACED